When people hear I am married to a Korean, I get the craziest questions about my living situation.

“Do you have to take off your shoes every time you walk in?” Yes. I used to do that anyway. I don’t like dirt tracked in the house.

“Do you have little trinkets all over your house?” Trinkets? Like little dolls or things? Uh, no but thanks for asking, I think.

“Are there bags of rice all over your kitchen?” Surprisingly, yes, there are two big bags of rice that my sister-in-law uses when making rice. I can never get them to be put away. And they are huge bags. Costco-like size bags.

“Do you get to eat Korean food every day?”

Before I go any further, let me just say this: I will be the first to admit I am not a humongous fan of every Korean food available. This isn’t to say I haven’t tried a number of things at least once to see if I liked it or didn’t. For example, I love Korean barbecue. I. LOVE. KOREAN. BBQ. There’s no other way to put it outside of that. It’s delicious, tasty, and goes well with all of the little dishes of food that comes with it.

Stephanie is reading this and saying, “Liar, you don’t eat all the food in the little dishes!” She would be correct.

I have also learned there are many foods that I do not like mainly because of the texture. I don’t like the gummy, gelatinous feel of some rice or fish cakes when I bite into them. The idea of my teeth biting into a rubbery substance just kind of grosses me out. I don’t know why but it does.

The other day when Stephanie and I went to the store, the bakery was giving out lemon bar samples they were scrumptious. I don’t know if it was because I had not had lunch or I was just craving something sweet, but these bite-size morsels of deliciousness were out-of-this-world good.

I’d like to believe I’ve been better about eating little snacks around the house but when we bought these treats, it was almost like being addicted to crack cocaine. They looked good. They smelled good. It melted in my mouth when I bit into one. Every time I grabbed the generic, cheap, plastic bowl that held them, I took a moment to savor the experience.

Yes, they were that good.

When I came home from work the other day, I decided I had to have one. It had been a long day with a bunch of work challenges going on. My stress levels were a bit high and having a lemon bar was going to make things all better.

Or so I thought.

Our house has been a disaster for the last couple weeks. We have been cleaning, remodeling, and updating areas of the house that needed some TLC. My brother-in-law is a home contractor and has been working on some of the projects, specifically the kitchen. Pots and pans were everywhere, canned food and other items were on the counter and on other tables. Food we had just purchased from the store just kind of put wherever there was space. It was amazing if you could find something to eat at times.

It was a mess. A big fucking mess.

When I went to the counter to pick up the lemon bars, I opened the generic, plastic bowl and shoved a bar into my mouth with my eyes closed expecting my taste buds to dance with joy as the sugary, lemony flavors cascaded upon my tongue.

I should’ve paid much more attention.

Within seconds, my eyes shot open and I looked around. This was not a lemon bar.

A second passed. Then another. I finally looked down at the bowl and realized what I had put in my mouth.

Of course I didn’t say this out loud because my mouth was full. I immediately went into panic mode.

My brother in law, Seong, was in the room working and as I looked down at the bowl. I put a piece of dduk in my mouth.

Aside: it is pronounced “th-ock” When I first read dduk, it’s not what I thought it was. There is a whole other story about that for another time. 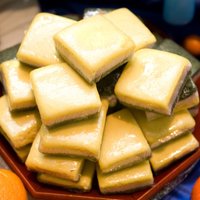 A very similar representation of the dduk I ate on this fateful day. (Image from Photobucket user Gellyroll1)

Dduk is a type of Korean rice cake that is basically a gelatinous gob of rice that’s been heated, steamed and in the mold of something like leaves or just cut into rolls. They can be colored and flavored.

Remember, when I said I didn’t like gelatinous stuff because of the texture? Yeah, dduk totally falls into this category.

My initial reaction was to spit it out because it tasted terrible, it was grainy for some reason and was really just bad. I wanted to spit it out like a two-year-old kid would, sound effects and all. I wanted to stretch my tongue out to scrape the flavor out with my fingernails. I wanted to scream to the heavens, “Why! Why would you let me do such a thing! I just wanted a lemon bar!”

I didn’t do any of this.

I kept my mouth shut with the piece of dduk relaxing on my tongue.  I held back the screams of agony because I didn’t want Seong to think I was being dramatic about a rice cake and poo-pooing on a Korean food that everyone but me liked. My eyes wanted to fill with lakes of tears. The taste was agonizing.

With my best poker face, I smiled at Seong, put the bowl down on the table and walked quickly to the bathroom. I put the dduk into a tissue and threw it with as much force as possible into the trash. It was mainly for effect but also to make me feel better. I scavenged the bathroom for the last of the toothpaste and brushed my teeth, used a tongue scraper and rinsed with mouthwash. It helped but not completely. The taste lingered in my mouth like the guest who stays just a little too long at your party after everyone else has left.

I walked back toward the den and something in me made me want to look at the bowl of dduk again. When I picked up the bowl and looked closely, there was no way it looked like a lemon bar. My face scrunched as I looked at it. The dduk was yellow only because it looked really old. It looked crusty and shining in the sunlight were cobwebs. Or at least I could have sworn I saw a web of some sort going across the remaining pieces. I was delusional at that point. My mind could have been playing tricks on me, I don’t know.

I called Stephanie after not finding the lemon bars and told her what happened. She laughed and laughed, said I was acting dramatic about the dduk. I tried to tell her I wasn’t but she didn’t believe me. When she got home a little bit later, I tried to plead my case that the dduk was old and bad.

“Steph, swear to God, I’m not being dramatic. I really did get a piece and it tasted terrible albeit I thought I was eating a lemon bar!”

Steph laughed and says again, “Okay Mr. Dramatic. I know you don’t like dduk but I’m glad you didn’t spit it out everywhere.” More laughter ensued.

“I couldn’t! Seong was there and if he saw me spit it out, I knew he would think I was crapping on Korean food again. I had to be discrete. That’s why I went to the bathroom and then brushed my teeth. I had no other choice,” I replied but she just kept laughing the more I talked. I finally went back to the table and grabbed the bowl.

“Look, I’m not crazy! I think there are spider webs in the dduk! Awe crap, that looks like that might even be mold!”

Stephanie laughed some more, then looked at the bowl. She went silent for a moment as her eyes opened wide. She looked at the bowl and then, perhaps in slow motion for dramatic effect, her gaze came up to meet my eyes.

There was silence for a split second and then tremendous laughter. “Oh honey, that dduk is bad! Why would you even eat this?” she said while still laughing.

“How fucking old is this? Why do we still have this? WHY DID I EAT THIS!?”

We couldn’t help but laugh after that. I never found the lemon bars. Apparently they were all eaten before I came home.

Suffice it to say I have not had another piece of dduk since.

I still haven’t had a lemon bar either.

@ndtex @mmilford85 Such a bummer if a loss after the errors in game one. These guys had it and couldn’t keep hold.… https://t.co/7QKLrs5vHH

Duh. —> COVID infections drop where people are vaccinated, rise where they’re not - The Washington Post https://t.co/faQvIDHArX

@ndtex I stopped watching and can’t go back. I’ll bring the bad juju back.

@AlexMontoya619 Get a monitor and put it on a stand to raise your eye level.

RT @MLB: Like these City Connect jerseys? We’ll HAPPily give one away. Just RT and reply for a chance to win. ⬇️ https://t.co/yWUqHHBDVL