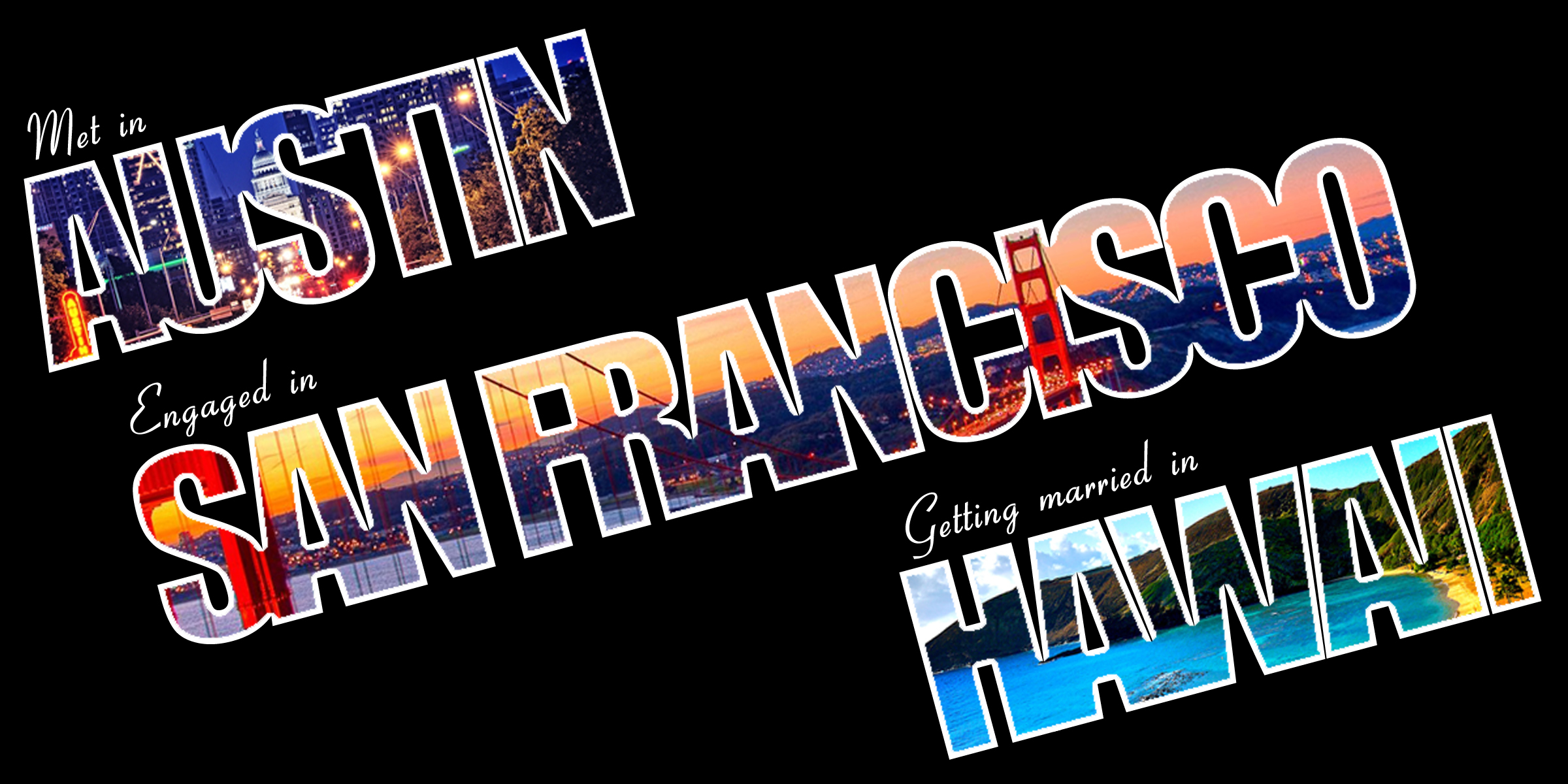 It’s not a story unless you hear both sides of the story so enjoy hearing how Stephanie and I met and the journey of our relationship.

Steph’s Story: My Side

This is my response to people when they ask how long Christopher and I have been together. “I recycled him,” is another one of my favorites.

Our story starts long before 2013. We actually met in Austin, Texas in 2001. Christopher moved to Austin after graduating from Notre Dame (in Indiana) and I was still living in Austin after I had graduated from St. Ed’s. I guess you could say we met at a bar. His high school friend was my college roommate. Ann had asked if I wanted to go out and meet up with her high school friends one night and because I didn’t have anything else to do, I went. I didn’t realize I would have so much fun and like this Texas boy so much. I can’t remember how long we stayed out, but I do remember thinking, it’s strange he doesn’t have a Texas accent. Come to find out later, people from El Paso don’t really have a southern accent.

After that first night, I saw lots more of him. We went to the movies, got our first Christmas tree together and just spent hours siting at Mozart’s (our favorite Austin coffee shop). A few months in, Chris had to move back to El Paso and for a while it wasn’t so difficult. The drive from El Paso to Austin is about 10 hours of nothing. After about a year, I was moving back to California and I figured enough was enough, so I did what seemed logical, I made my grand gesture.

I spent my last few hundred dollars and bought the man I love a plane ticket to move with me. I was nervous, but when my roommate assured me that, “only an idiot would not get on that plane.” I didn’t worry. Well, I guess I should have been worried, since I flew back to California with an empty seat next to me.

For me that was the beginning of the end for us. I stuck it out a few more months, but didn’t really see the point. I did something equally as hurtful. A few months later on Christmas Day we were making the trip from El Paso to Austin and in the midst of our 10 hour drive through nothing, as Chris was trying to ask me about what we were going to do during Spring Break, I just cut the cord. I told him I didn’t see a future and we should be a part. How he didn’t pull over and shove me out of the car is beyond me. Must be those Texas manners.

After New Years, we didn’t see or talk much. For 10 years, we lived our own lives, graduated with higher level degrees, dated other people, he got married and had a son, I lived with somebody, bought a house, changed cars and life went on for each of us separately.

I guess you could say the Internet brought us together again. I had been refusing to join Facebook and as a compromise to my dear friend Marie, I updated my LinkedIn account. Within 48 hours of updating, I had an email from Christopher asking, how I was doing and he hoped I was well. I didn’t even know where to begin. I had just gotten out of a really long relationship and to make myself feel better, I bought a house that I could not afford. On top of that, my dad was dying of liver failure and I was told after 9 years of teaching Kindergarten, I would be moving to 3rd grade. Life was grim but I couldn’t help but smile every time I turned on the computer and had an email.

Without going into every single detail, we now live together, in California. We have come full circle. I guess you could say, we are right where we should have been 12 years ago. When it’s meant to happen, no matter how much you fight it, it happens. ☺

Chris’ Story: The relationship, round two

I’d like to preface my story by saying it’s a story that took a long time to mature and develop. It needed some tender loving care.

And the ability to realize mistakes and grow from them.

Our story begins in 2001. There happened to be a presidential election debacle during my senior year at Notre Dame and then a little terrorist attack in September of that year. I had finished school and had failed miserably at finding a job. I took what I had after 9/11 and went to Austin/San Marcos. I got a job at JC Penny in San Marcos and was really just praying something good would work out soon.

There were a ton of former HS people who lived in Austin and I happened to get I touch with my friend Ann to see what was going on. She was living in south Austin and said she was going to hang out that night with her roommate and some other friends. She asked if I wanted to come along and I jumped on the invite.

I met her friends later that night and her roommate was going to be late because she was still working. We had some drinks (one to be precise, I couldn’t afford to get all crazy) and I had fun catching up.

I still remember meeting Steph for the first time. She came into the restaurant slightly frazzled and just excited to be finally getting some dinner. She sat across and down the table and there were the generic introductions.

“Chris, this is Stephanie, my roommate,” Ann said. I said hello and didn’t really say much after that. I was intrigued but I didn’t say a whole lot. I was quiet. As the night ended, Ann said I was always welcome to hang out. I took her up on the offer and got to see Stephanie more.

The more we hung out, the more I noticed I like being around Steph. In fact, I knew I liked her because we were at the movies one night and she was said she was going to get up and get some snacks. I jumped up immediately and said I would help. Ann looked at me with a “what the hell was that” look and I looked at her back saying, “What? I’m hungry, and I’m going to help.”

I was lying. I just wanted to be around Steph and getting popcorn was my cheesy way of getting to hold her hand. I guess she liked that I helped because we started talking more when everyone didn’t go out together.

We ended up dating and after some problems at home in El Paso happened, I needed to move back. We did the long distance thing for a while. It helped that I found a job with a school district because I could afford to travel back to Austin to see her. I wanted to desperately move back to be with her and it wasn’t working out for one reason or another.

Steph ended up moving back to her home of San Jose to go back to school and I then used a lot of free time to find a job in California so I could move there. I was deeply in love with her at this point and wanted to make sure I could afford to live there, support her and hopefully, get married some day.

Unfortunately the relationship that I was maintaining in my head was not the same as Steph’s. We spent our first Christmas with each other’s family and the second time around, we did the same. She came to El Paso where we did some Christmas Eve stuff with my family and then began driving to Austin to see her parents who were still living there.

Along the way somewhere on I-10, we started talking about stuff and ended up breaking up. I was crushed. I didn’t know if I wanted to stop in the middle of nowhere and kick her out or just do nothing. I was more in a daze than anything. In fact, I was in a daze for a good six months after that.

I eventually pulled myself together, moved on and life took its course. I dated, met other people, got married and divorced, had a kid. It was a roller coaster of a 10-year gap since we had talked.

Then, completely by chance, I was on Linked In and updating my resume. I was busy looking for jobs and I had to get my networking in gear. I happened to look up at the “People You Might Know” section of the page and low and behold, Steph’s name pops up.

I hadn’t really thought about her in quite a long time and I figured she would be married with kids and living a wonderful life of happiness. I shot her a note to say hey not thinking I would get a reply.

Low and behold, I got a note back and before I knew it, we were talking and catching up on all kinds of things. More importantly we cleared the air about our breakup and I came to realize I broke her heart before she broke mine when she asked me to get on a plane with her and I didn’t. I was such an idiot.

The rest, as they say, is history. I moved to California and we are getting married.

It only took 12 years to figure it out.

It's not a wedding without a registry! Check out our registry at Crate and Barrel.